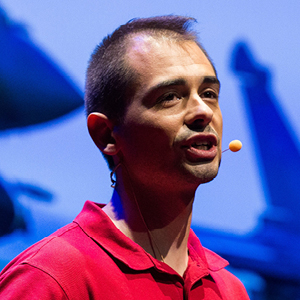 French-Canadian, “Até” is a former athlete and fighter pilot turned Keynote Speaker, Consultant and Airline Pilot.
Flying fighter aircraft from aircraft carriers in the French Navy for over a decade he had what you might call an intense career:

• He flew day & night combat operations in Iraq, displayed in airshows in Europe in front of 110 000 people and instructed the new generation on the Dassault Rafale.

• With over 2500 hours of flight time and 200 carrier landings he flew numerous combat missions providing support to troops (including Canadians) on the ground.

• During his career he faced emergencies, had to take life or death decisions and led young pilots into combat. He got the cross for military valour for his actions in combat.

• Now a pilot for Air Canada “Até” shares the methods he used to survive in fast jets with the corporate world as a Keynote Speaker, Coach and Consultant.

• He uses Virtual Reality flight simulators in some of his high Executive workshops enabling them to get out of their comfort zone and learn a lot about themselves in just a couple hours.

Pierre-Henri will also be the Focus Expert for CMEExpo’s Ask an (Event) Expert, providing 20-minute expert advice specifically tailored to you and your situation.