Launched in Ottawa in 2001, The Works Gourmet Burger Bistro has grown to 26 Ontario locations, including two in Toronto.

Adding to the fun is “Patty Like a Rock Star.” Launched Jan. 18, the limited-time, rock-themed menu showcases patty options and toppings such as Surf and Turf, anchored by the new signature shrimp and beef patty, and Hazed and Confused, a new bacon and beef patty topped with red wine caramelized onions, Swiss cheese, arugula and Dijon.

Off we went to the downtown Toronto location, at Church Street and Wellington Street East, that’s fun in its urban industrial look of corrugated metal walls, hardwood floors and bare tables. From the PA system pours a classic rock soundtrack. 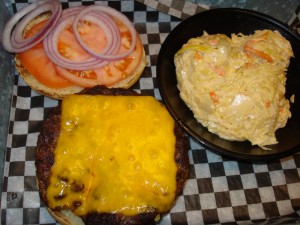 A patty made from lean ground elk is a bit gamier (in all the right ways) and is loaded with avocado, sun dried tomato and feta.