It’s an understated yet tastefully designed bistro space — black and grey palette, plenty of hard surfaces, clustered globe light fixtures, Edison bulbs, banquettes and, up front, a snazzy bar — that is casual yet chic, definitely in tune with its trendy neighbourhood.

Executive chef Ryan Wilson-Lall, who’d been on the launch team at Le Germain Maple Leaf Square and, most recently, worked at the AGO’s Frank restaurant, where he spent three years, uses seasonal, local ingredients filtered through a global sensibility backed up by assured technique. Working in a glassed-in kitchen, in full view of the dining room, Wilson-Lall and his team turn out a succession of stellar dishes.

For example, there’s a sumptuous raviolo, of about 6 inches, which incorporates runny egg, bacon, whipped porcini egg white and roasted garlic mascarpone into an extravagantly delicious dish. Not to be missed. 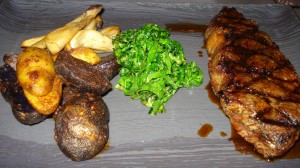 But the evening’s highlight is sea bream, pan-seared to delicate moistness and adroitly paired with charred broccolini (for quietly bitter notes) and brilliant ‘spaghetti’ made from spiralized zucchini. 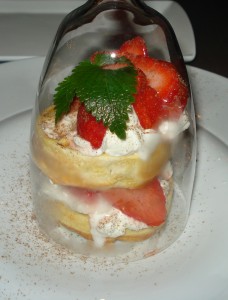 To finish, the kitchen sends out freshly made waffles, zapped with tres leches (literally “three milks,” traditionally evaporated, condensed and heavy cream), stacked and layered with strawberries, which are light and homey.

Buyouts will be considered for the restaurant, which seats 70 people. A private room seats up to 10.