For five years, Pat Zisis ran Kalamata Greek restaurant, on Lakeshore Boulevard West, near Mimico, then decided to change course, renovated the space and launched Thrive. It’s an extremely pleasant room, open and airy, bright in its light-green palette, a lounge area outfitted with a fireplace and comfy sofas enhancing the homey-kitchen/community-hub feel.

Chef and, along with Zisis, Thrive’s co-owner, David Perez turns out smartly conceived vegetarian fare that sings with flavour. 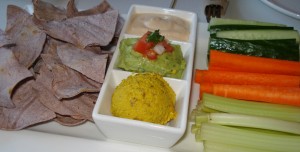 One night, there’s Mexican black bean soup, carrying a hint of spice and speckled with chunks of tomato. Dips rock, especially the ultra-fresh, brightly flavoured guacamole and the chunky hummus made with raw almonds and perfumed with turmeric.

There are substantial and elaborate bowls anchored by brown rice, quinoa or freekeh (green, roasted wheat kernels). I choose freekeh for the Buddha bowl, which layers, on top of the nutty grain, baby spinach, carrots, mango, cilantro, peanuts, red onion, black sesame seeds and sprouts in a lively tahini-based dressing.

Even better is the Hercules bowl. There, chipotle oil lends smoky heat to a construction of raw almond hummus, cucumbers, red onion, tomatoes, avocado and grilled tofu, all on top of nutty brown rice.

Desserts are a revelation. Flourless, not-too-sweet cashew cookie is outstanding, while mango puree jazzes rich cheesecake on an intensely nutty cashew base. But best-in-show goes to a mousse made with raw cacao and avocado. It’s silky, rich, deeply chocolatey and would be at home on the dessert menu at any high-end restaurant in the city.