At Khazana, his 7,000-sq. ft. restaurant in Brampton, northwest of Toronto (his first Canadian location, it opened in December 2014), customers do, indeed, eat well. 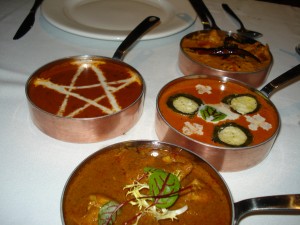 Among main-course proteins, there is much to admire, too. Coconut-scented curry enrobes chunks of moist haddock, while biryani brings nuggets of supremely tender lamb in deftly spiced rice. Inspired by a renowned roadside restaurant on the Ambala-Delhi highway, in India, a dish of supremely moist chicken, cooked in a light but spicy onion gravy, pleases mightily.

Desserts continue the kitchen’s hot streak. A stuffing and garnish of rose petals adds fragrant sweetness to gulab jamun, those irresistible soft balls of deep-fried dough made from milk-solids. Rosewater garnishes mint-inflected kulfi (India’s denser, richer version of ice cream). Best-in-show, however, goes to my favourite of all Indian desserts, shredded, sweetened carrot cooked in milk and cream and garnished with chopped nuts and fragrant spices.

Outfitted with modern fixtures, a palette of understated grey, hardwood floors and padded booths, the spacious white-tablecloth room is tranquil and stylish.

Full buyouts will be considered for the restaurant, which seats 225 people. A private dining room seats 25.