I’ve been going to Salad King Thai restaurant, in downtown Toronto, since 1993, when it was on Gould Street, across from Sam the Record Man (now closed).

This year, Salad King celebrates 25 years in business, and my, how the restaurant has grown. When Ernest and Linda Liu first bought the eatery in 1991, it had 60 seats, five employees and served about 70 customers per day. A quarter century on, Salad King, now located in a bustling second-floor space on Yonge Street, just north of Gould, features 175 seats and 65 employees and serves 1,200 people per day.

In 2012, the Thai government recognized Salad King with its Thai Select award honouring the kitchen’s authentic Thai cuisine (in September, the restaurant is scheduled to receive the award again). This is a testament to the leadership of Salad King’s managing director Alan Liu, Ernest and Linda’s son. Better still, the restaurant’s price point offers terrific value. 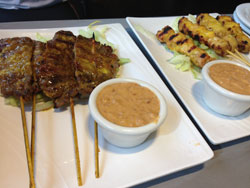 The kitchen is also strong on curries, which are rich and deeply flavoured. Emerald curry is fragrant with coconut milk and loaded with veggies; lemongrass and chili sauce animate Evil Jungle Prince filled with eggplant, baby corn, mushrooms and carrots.

Salad King’s pad Thai is one of the better versions around town, properly earthy from fish sauce and tamarind.

Finish with the classic Thai dessert: a mound of warm sticky rice drizzled in a sauce rich with coconut milk and garnished with slices of sweet mango.

Buyouts will be considered for the restaurant, which seats 175. Restaurant can also accommodate large parties, with seating arranged in groups.