The reimagined split-level space has jettisoned the modern-art paintings in favour of a simpler look, highlighted by a tree sculpture and backlit wine display bookending the bar. Adding drama are 70 tumbleweeds, sourced from Nevada, that hang from the ceiling. The effect is one of contemporary understatement.

On the menu, chef David Lee has added some creative vegetable-forward dishes, but still kept a full slate of dishes to appease carnivores. Flavours are more focused and the kitchen’s technique is as assured as ever.

A vegan starter, brand new to the menu, is a standout: Heirloom carrots are oven-roasted until they’re as custardy-soft as a sweet potato and garnished with sunflower-based ‘sour cream.’ 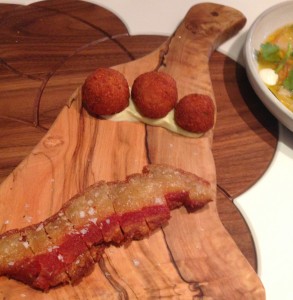 One of Lee’s classic dishes, crisp duck salad, is better than ever, the meat succulent and rich, its julienned green papaya and cucumber ultra-fresh and zinged with chilies and mint. Other must-have apps include chunks of fork-tender octopus, stained with smoked paprika and accessorized with potatoes, and translucent slices of kanpachi ceviche garnished with jackfruit, mild aji Amarillo pepper and olive oil. Salt-cod fritters are greaseless, creamy textured and mild, while pork cheek is shatteringly crispy with just the right touch of fattiness. 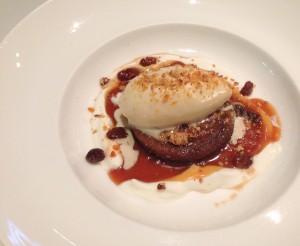 Sending smiles around the table are a duo of exemplary desserts: sticky date pudding, rich and not too sweet, kicked into overdrive with pecan praline, rum raisins and brown butter ice cream; and sweet/tart rhubarb compote cleverly garnished with dried-fruit/nut granola and avocado sorbet. A chocolate truffle, filled with salted caramel, provides the fitting ending to a perfect evening.

Throughout, the polished serving team is gracious and knowledgeable.

Group buyouts will be considered for the full space, which accommodates up to 180 people. A semi-private space seats up to 36.