Last October, Vancouver’s Miku Japanese restaurant set up shop in the RBC building at the corner of Queens Quay and Bay Street, in Toronto’s SouthCore neighbourhood.

It’s a sprawling, high-ceilinged room, all hard surfaces sporting a palette of greys and light-wood accents. Up front, there’s a small sushi bar, while a lively eating counter, tables and booths fill out the restaurant’s middle section.

Miku’s specialty is aburi sushi, where sashimi, nigiri or oshi (pressed sushi) is lightly seared with a flame deflected off a chunk of bincho charcoal, to impart deep smoky notes. 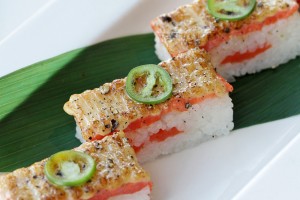 Leading things off is the aburi sashimi selection, and under the direction of sushi sous chef Hiroshi Endo, the plate delivers sparklingly fresh fish enhanced by both the flame and adroitly calibrated garnishes: Hamachi (yellowtail); sockeye salmon with salmon roe and earthy-bright citrus-anchovy salsa; bluefin tuna, wasabi and soy-based sauce; and the best of a very strong bunch, fat, seared scallops lavished with cod roe aioli.

Equally good are the kitchen’s cooked items. Best-in-show is the exquisite miso-baked sablefish in yuzu-miso reduction paired with a prawn fritter. Running a close second is rich pork belly and sweetbreads whose richness is cut by sweet and sour red cabbage, Japanese mustard and roasted grapes.

And for heaven’s sake, save room for dessert. The showpiece is a Japanese take on the French classic opera cake built on green-tea genoise sponge and matcha buttercream. Warm matcha chocolate fondant is dark and decadent, and imaginative ice creams (jasmine; miso salted caramel) and sorbets (mandarin-yuzu; green apple kiwi) hit the spot.

Buyouts will be considered for the restaurant, which seats 180 people, with an additional 80 seats on the patio. In addition, there are two private dining rooms, one seating 14 and the other, 22 (both rooms have full audiovisual capabilities).