In early December, Jamie’s Italian, a partnership between British superstar chef Jamie Oliver and Toronto-based King Street Food Company, opened in Toronto’s Yorkdale Shopping Centre. The Toronto restaurant is the first North American location of Jamie’s Italian, which launched in 2008 and has grown to more than 60 locations worldwide.

King Street Food Company owns and operates a number of Toronto restaurants, including the growing Buca mini-chain of Italian eateries, and the organization tapped Frank Venditti (ex-Bar Buca) to head up the kitchen at Jamie’s Italian Yorkdale.

The menu hews to homey, traditional Italian fare made with high-quality, fresh ingredients. Demonstrating the virtues of homestyle Italian done right is bruschetta topped with eggplant-based Sicilian caponata relish — and Venditti’s is perfect, sweet and with good depth of flavour. I could make a meal of this. 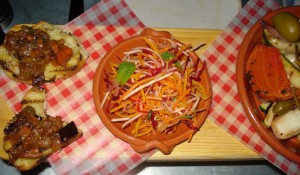 Venditti’s mains bring a fat filet of wild salmon baked until it’s moist and tender, served with balsamic-roasted veg. More charming still is the enormous pounded and breadcrumbed turkey breast stuffed with fontina cheese and prosciutto and topped with a gently fried egg.

Kudos to the dessert team for turning out smooth mascarpone cheesecake spiked with lemon and topped with Italian meringue and lemon curd. Even more impressively, the kitchen breathes life into that most clichéd of Italian desserts, tiramisu, by significantly increasing the number of coffee-soaked spongecake layers and (the genius touch) by adding orange to the mascarpone filling.

Early on a Sunday evening, a boisterous crowd packs the fun, 8,000-sq.-ft. space outfitted with high ceilings, exposed brickwork and, up front, a large, welcoming bar.

More Jamie’s Italian restaurants are planned for Canada, with the next location expected to open in Square One Shopping Centre, in Mississauga, Ont., sometime this year.