East Thirty-Six is a terrific addition to downtown Toronto’s dining scene. Located in the space formerly housing an oyster bar and, before that, Lucien, East Thirty-Six has operated for three years, but feels like it’s been around forever thanks to an inviting upscale-tavern decor that’s timeless and contemporary all at once: hardwood floors, black-padded banquettes, granite-topped bar, wrought-iron ceiling details, and wall-mounted light fixtures that echo the eatery’s historic Corktown neighbourhood.

Plates are sized for sharing. Quality is high, thanks to sophisticated, cleverly conceived dishes anchored by first-rate ingredients and rock-solid technique.

Also superb are scallops, sparklingly fresh and sliced paper thin, tangy from lime and olive oil and given crunch from celery and rich accents from shaved lardo. 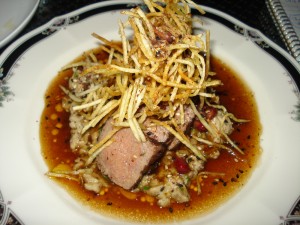 Buyouts will be considered for the restaurant, which accommodates 65 people for seated dinners and 120, cocktail style. Semi-private Purple Room seats 14.