No matter how many times I visit Nirvana Indian restaurant, in Mississauga, Ont., the menu continues to surprise me and offer up new and exotic culinary gems.

On my most recent visit, those gems took the form of Hakka-style chili chicken (ordered ‘with sauce’), greaseless, succulent nuggets, stir-fried with chilies, bell peppers, garlic and onions, that are properly spicy, with good depth of flavour. More exotic still, and visually arresting, is noorani seekh. Fire-grilled in the tandoor oven, it’s a kebab of moist, perfectly spiced ground lamb wrapped in minced chicken, a combination made in culinary heaven. 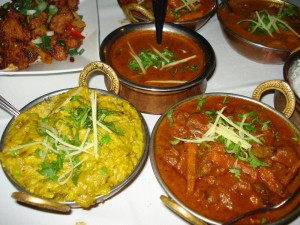 As reliable as the food is the genial and polished service delivered by a professional staff overseen by general manager Karan Bajwa, who is always available to suggest new and interesting dishes from Nirvana’s extensive menu.