It’s a beautiful space that recalls an airy Paris brasserie, but in a slightly more casual vein, perfect for the tourist-magnet Distillery zone.

Helmed by executive chef Paul Benallick (ex-Canoe, Auberge du Pommier, Jump), the kitchen is more assured than ever, backing up creative ideas with rock-solid technique. As for that sense of unfussy charm, the dinner menu, in addition to upscale dishes, offers casual French classics such as a three-egg omelet and tartines (open-faced sandwiches) and a clever take on the French classic pot au feu — pot au ‘pho,’ built on braised lamb shank, cabbage and bonito broth. 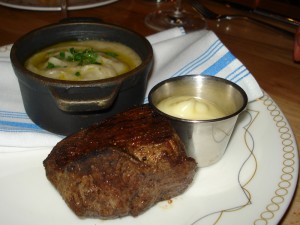 Finishing off the evening is vanilla pudding served in an enormous glass goblet and garnished with peach-tea pudding and apricot compote. But best-in-show goes to the soufflé, creamy, feather-light and bursting with passionfruit flavour (and its accompanying pistachio financier, served warm, is good enough to be a stand-alone dessert). Soufflé and financier are as classically French as it gets — and there’s simply no improving on that.

Cluny’s event room seats 80 people and is divisible into two rooms seating 20 and 40.