Paralia is my favourite Greek restaurant in Toronto. I’ve always enjoyed the restaurant’s upscale food, but earlier this year, Paralia hired a new chef, Oscar Kerem Akbalik, who has taken the kitchen to a whole new level.

Oscar anchors his creative dishes in Greek tradition and incorporates Mediterranean influences that give Paralia’s food a fresh, sophisticated spin. Creativity, however, means nothing if you can’t execute on the plate. Oscar backs up his inventive flair with rock-solid technique.

Even better, Paralia has introduced Mezzelicious — essentially Greek tapas that can form the basis of a deeply satisfying meal. 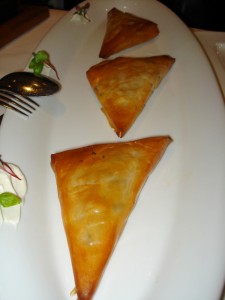 Take the sensational rabbit pie, for example. A lean meat, rabbit, in the wrong hands, can be disastrously dry. In Oscar’s hands, however, the rabbit is terrifically moist, perfumed with mint, basil and parsley, and stuffed into flaky phyllo pockets. I could happily make a meal of this dish.

Oscar stuffs minced seafood, pearl onions and capers into fork-tender calamari. He braises octopus until it’s supremely tender and perfectly complemented by the sweetness of Jerusalem artichokes and the gentle acidity of an intense tomato sauce. It’s rustic and sophisticated all at once.

The zucchini fritter is a revelation. It’s a thick, delicate pancake of grated zucchini stuffed with creamy feta and herbs, and is expertly seared so that it arrives without any hint of oil or grease. There is no other Greek restaurant in Toronto doing food like this.

Leeks — what a delight to see this sadly underrepresented vegetable on a Toronto menu — are perfectly braised to tenderness, their oniony sweetness working marvelously with Dodoni’s feta rendered creamy thanks to a quick turn under the broiler. Soft, sweet eggplant and salty, oozingly delicious kefalotyri cheese animate a sizeable meatball.

At dessert, Oscar has improved the feta cheesecake, making it creamier, smoother and tangier than ever, and partnering it with brightly flavoured berry compote.

Group dining options include the open-concept Cove, which seats 150, and an upstairs Moroccan-themed lounge that hosts 60 to 80 people, seated and 100, standing.

The entire restaurant is available for buyout – combined, the dining room plus Cove seat 350 (600, including the outdoor patio).