In my last review of Paralia, my new fave Toronto Greek restaurant, located on the city’s east-end waterfront, I focused on the splendid Mezzelicious menu (available Thursday to Saturday and bargain-priced $8 to $10).

This time, I’m focusing on non-mezzelicious appetizers and mains turned out by Oscar Kerem Akbalik, who has taken Paralia’s kitchen to another level.

His Greek dips are Toronto’s best. To taramasalata, he adds smoked salmon and caramelized shallots that bring great depth of flavour to a typically one-note, salty disappointment. Chunky feta dip carries the welcome heat of house-smoked chili paste. To garlicky tzatziki, Oscar adds fennel; the texture is rich and super-smooth. Eggplant dip is given crunch and nuttiness with pinenuts and sweetness from shallots. (Substitute soft and smoky grilled olive bread for the pita bread.) Delicate dumplings are the best spinach-filled phyllo pastry I’ve had anywhere. 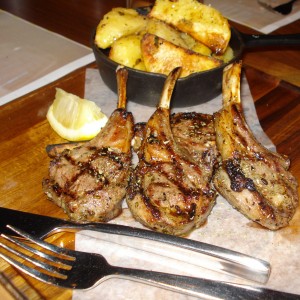 Complementing any main is a side of fluffy rice, tossed with tender sauteed spinach and perfumed with herbs, that I could eat five times a week.

At dessert, Oscar has improved the feta cheesecake, making it creamier, smoother and tangier than ever; upgraded the baklava so that the phyllo is more tender and lighter than before (and also less sweet); and introduced a molten chocolate dessert that’s like eating a liquid dark-chocolate brownie.

Group dining options include the open-concept Cove, which seats 150, and an upstairs Moroccan-themed lounge that hosts 60 to 80 people, seated and 100, standing.

The entire restaurant is available for buyout – combined, the dining room plus Cove seat 350 (600, including the outdoor patio).