For more than two decades, Paradiso has been dishing up Mediterranean-inspired fare to the denizens of Oakville, Ont., the prosperous bedroom community about 45 minutes west of Toronto. (A second, newer location operates in nearby Burlington.)

Pastas shine. A staple of the menu since the restaurant’s launch, ravioli, stuffed with sweet crab, spinach and chevre, and set atop basil cream, are tender and rich, without being cloying. Dill-scented tomato sauce anchors tagliatelle noodles loaded with mussels, shrimp and ultra-tender calamari rings. Spaghetti is tossed with rich, garlic-sweetened ragu of veal and braised beef that would gladden an Italian grandmother’s heart. 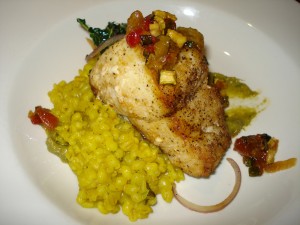 Other mains are similarly successful. A generous triangle of crisp phyllo pastry is stuffed with a delicious mix of roasted veggies, ricotta and feta, and set atop chili aioli. Barley risotto, zucchini jalapeno relish and avocado puree flatter a thick slab of superbly moist Pacific cod.

Seating 160 people, the restaurant is available for group buyout. Also available are two private rooms, one seating 40 and accommodating 50, cocktail style, and the other seating 50 and hosting 60, cocktail style.