Mildred’s Temple Kitchen confidently goes about its business in Toronto’s Liberty Village, where it has become a fixture for its weekend brunches (the blueberry pancakes are justifiably legendary).

The airy, high-ceilinged room, which fills early on a late autumn evening, features plenty of hard surfaces and, raised up a few steps from the floor, a busy open kitchen turning out refined comfort food. 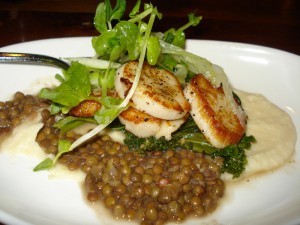 Tender and juicy chicken thighs wear a cloke of lively Moroccan spices and sit on a bed of dried fruit and sunflower-seed quinoa.

Group buyouts will be considered for the restaurant, which accommodates 110 people for seated dinners and 175, cocktail style.