For 50 years, Carman’s Club steakhouse operated on quiet Alexander Street, in downtown Toronto, in a Tudor-style Victorian house a puck’s throw from Maple Leaf Gardens. During those five decades, the clubby steakhouse was a favourite of celebs and NHL hockey players.

Following owner Arthur Carman’s death in 2010 and the restaurant’s subsequent closure, businessman Jason Huang bought the business in 2011. After a three-year, $800,000 renovation and a spelling change (to Carmen’s Steak House, to honour the eatery’s history), the restaurant reopened in November, 2014. 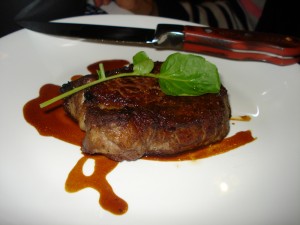 On to the main event — steaks, available as Canadian prime, USDA prime and Snake River Farms wagyu. Liu prefers to sear his steaks on a flat-top griddle, for better flavour and juiciness (but he will grill steaks on request), and the results were first-rate. The 6 oz. Canadian prime ribeye, cooked precisely medium rare, as ordered, featured a juicy, red centre and good char, while the thick-cut 7 oz. Canadian prime striploin possessed a satisfying mineral tang. On the side were buttery mashed potatoes and al dente sautéed veg.

To finish, there was silky crème brulee scented with coconut and garnished, cleverly and deliciously, with bits of crumbled cookie.

Buyouts are available for the restaurant, which seats 150 people and accommodates 175 standing, cocktail-style. There are four private rooms, seating 14, 30, 40 and 60.