It had been several years since I’d visited Carbon Bar, the lively barbecue restaurant in downtown Toronto. After visiting recently, I can report that the food has become more focused and anchored by more assured technique.

Do not miss the fries made with the starchy root vegetable called yucca. The resulting fries are lighter, crisper and sweeter than any potato ever was. Charred shishito peppers, smoky and tender, have a slight heat, and KFC (Korean fried cauliflower) wears a light crust and subtle spice. Hamachi tartare is superb, sparklingly fresh and paired with avocado.

But the star attraction at Carbon Bar is barbecued meat, and the kitchen doesn’t disappoint. The Pit Master Platter brings superb brisket that’s moist and tender (my new favourite in the city). Ribs are meaty and moist, and fried chicken is crispy in its spiced batter.

Southern U.S. barbecue is as much about the sides as the mains. Carbon Bar’s fixin’s include crisp slaw, perfectly tender collard greens, moist cornbread, and barbecue beans loaded with pit-fired pork.

The kitchen is adept at fish, too, as evidenced by supremely moist and delicate salmon. 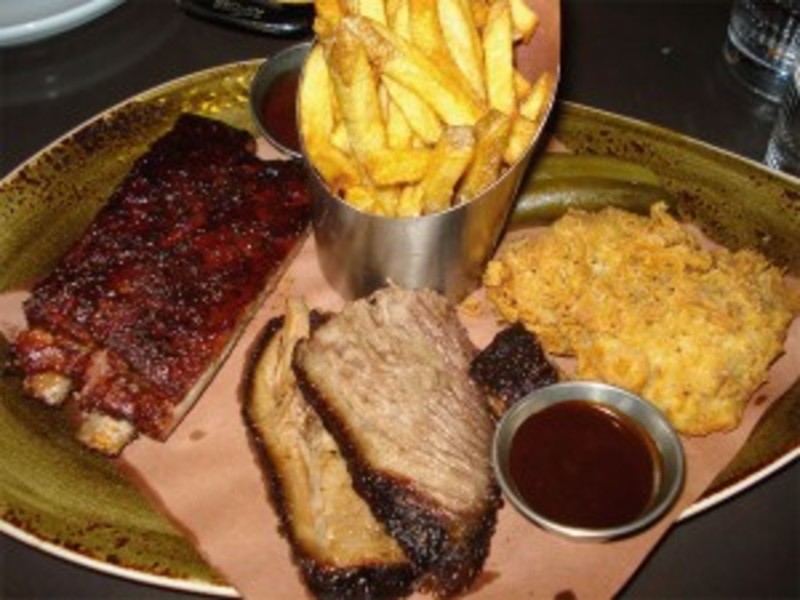 Located in the space occupied, many years ago, by Citytv, the dining room, designed by Giannone Petricone Associates Inc., is stunning in its industrial chic: exposed brick walls, maroon booths and banquettes, and constellation of globe-shaped light fixtures, hanging from a 30-ft. ceiling, that create a feeling of airiness and space.

Upstairs, a private room, overlooking the dining room, seats 30 people and hosts 50, reception-style. Main dining room (seats 95 and another 12 at a chef’s table) plus bar (seats 45) will be considered for buyout at lunch and on Sundays.