After launching in late 2012 to middling reviews, Café Boulud, in the Four Seasons, Toronto, has brilliantly reinvented itself. A $2 million renovation, overseen by star restaurant designer Martin Brudnizki, has turned the second-floor space into a softly lit, modern Paris brasserie, replete with warm, textured surfaces and finishes: Hermès wallpaper; plenty of brass and mirrors; armchairs covered with luxuriantly crumpled leather.

Café Boulud 2.0, which carries the imprimatur of French-born, New York-based superstar chef Daniel Boulud, launched in early September, with a kitchen helmed by Sylvain Assié, who’s worked at Four Seasons properties in the south of France and Bora Bora.

Boulud, Assié and the team have tweaked the menu to focus more on traditional brasserie-style French dishes. The results are impressive.

Herbed, country-style chicken-liver and pork pâté, sourced from renowned Paris charcutier Gilles Verot, manages to be upscale and homey all at once. It’s served with the traditional accoutrements: toasted sourdough baguette, cornichons and grain mustard.

As part of the restaurant’s revamp, Boulud installed a Rotisol rotisserie imported from France, and issuing from it is tender, juicy half chicken served with commendable herb-dusted frites. A rich, tarragon-perfumed béarnaise sauce enhances 30-day dry-aged 10 oz striploin, wonderfully juicy and possessed of a deeply mineral tang. Alongside are more of those fine frites. 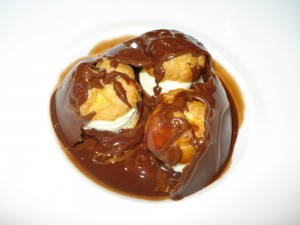 Desserts include richly flavoured coconut sorbet, and sophisticated molten chocolate cake whose accompanying maple black-cherry ice cream could stand alone as a dessert. But the showstopper is profiteroles, halved and sandwiched around vanilla ice cream, the whole covered by a thin dome of dark chocolate. After setting down the dessert, the server pours warm chocolate sauce over the hard-chocolate dome, which melts and fragments and, along with the molten sauce, cascades around the profiteroles. So much chocolate, so much pleasure…