Made a return visit to Bindia, on Market Street’s restaurant row, running along the west side of St. Lawrence Market, in downtown Toronto.

The mode is Northern Indian, modernized and lightened. First and foremost, I judge an Indian kitchen by its tandoori items, and Bindia’s excel. Bright red from their marinade of yogurt and spices, jumbo prawns are superb — tender, deeply smoky and, as advertised, extra-large. These alone warrant a return visit, as does chicken kebab korma, chunks of tandoor-cooked minced chicken simmered in cashew onion cream carrying bold heat. Also from the tandoor come malai tikka, chunks of smoky chicken luxuriating in a slightly spicy cashew/almond cream.

The kitchen is no one-trick pony, however, and also does non-tandoori items well. A properly sour vindaloo sauce enrobes chunks of lamb, and brightly seasoned coconut curry bathes delicate chunks of cod. 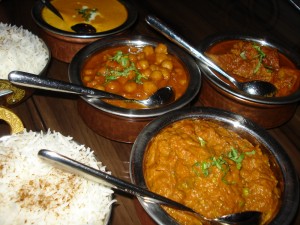 The vegetarian side of the menu holds delights as well — for example, house-made cheese and vegetable dumplings studded with dried fruit in mild cashew cream; slow-cooked black lentils given depth of flavour by ginger, garlic, tomato and coriander; and tandoor-baked mashed eggplant animated by tomatoes, onions and spices.

Ending this splendid feast is kheer. Rich, silky smooth and perfumed with cardamom, it is the Rolls Royce of rice puddings.

Providing a fittingly contemporary backdrop to the food is a bright and airy space, outfitted with lots of hard surfaces (bare tables, tile floors) and, in the good weather, a small patio on Market Street.

Buyouts are available at the restaurant, which seats 54 inside and 20 on the patio. Also available is a semi-private booth section seating 20.