On a recent visit to Cluny Bistro, the charming and bustling French restaurant in Toronto’s Distillery District, I encounter a slew of new and interesting dishes.

For example, there was a salad of roasted yellow and purple carrots on a bed of baby kale — the softest, sweetest kale I’ve ever eaten — sparked by a vinaigrette mellowed by wine and accessorized with smoked yogurt. 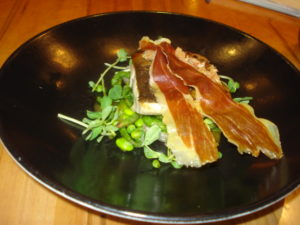 The Cluny Caesar salad was a sight to behold: the bowl covered by a circular cheese crisp, itself topped by a poached egg draped with an anchovy. Crack through the cheese crisp and dig into a bed of vinaigrette-moistened baby romaine. 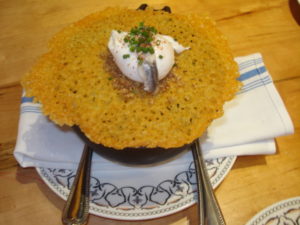 Next up, servers descend on our table and present, with much flourish, a soup. It’s a vegan split pea, which they pour into each bowl that’s first been filled with an almond milk crème fraiche. The soup is velvety, the crème fraiche frothy and sweet, and the accompanying peas and diced carrots in perfect harmony with the whole.

And then comes the daily fish special, Ora King salmon. Sourced from New Zealand, this breed of fish is known as “the wagyu beef of salmon.” What arrives is an enormous slab of fish, enough for at least three people. It’s served with tender braised leeks, roasted potatoes and green beans almondine. 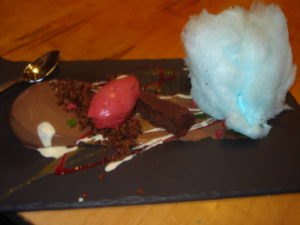 At dessert, do not miss the intense rich and silky chocolate pot de crème, whimsically sided with bit of salted caramel and flourless chocolate cake.

Cluny channels an airy Paris brasserie, but with a casual ambience perfectly in tune with its location in the tourist-magnet Distillery District.