The chain’s 28th restaurant and its first in Eastern Canada, the multilevel Toronto location sprawls more than 15,000 sq. ft., encompassing three spaces: the Rob Feenie Dining Room and Lounge, Kate’s Bar and The Deck, featuring a retractable rooftop that will convert that space into a patio in the warm weather.

A seared scallop, apple curry foam and basil oil garnish thick and deeply flavoured butternut squash soup. Salads are impeccable, and include a generous mound of kale moistened with a sharp Dijon-lemon vinaigrette and topped with parmesan crumble, and an equally generous pile of mixed greens tossed with feta, cucumber and tomatoes in lemon-thyme vinaigrette.

Squash shows up again, this time blended with mascarpone and tucked into tender ravioli garnished with truffle butter, sage leaves and a perfectly cooked shrimp. 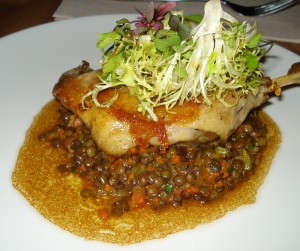 In addition to the regular lineup, the menu features a number of dishes created for the Toronto opening. These include moist and tender duck confit atop a bed of earthy lentils speckled with double-smoked bacon, and meltingly tender miso-glazed sablefish in duck broth loaded with shiitake mushrooms and fingerling potatoes.

Wrapping up the meal is ultra-fresh key lime pie whose sturdy crust is piled high with tart, silky curd, and chocolate peanut butter crunch bar that’s rich, not too sweet and garnished with vanilla ice cream.

Buyouts will be considered for the entire space, with seats 350 people. Other group options include the second-floor Deck space, seating 180, and Kate’s Bar, seating over 100 inside plus another 60 on a patio.