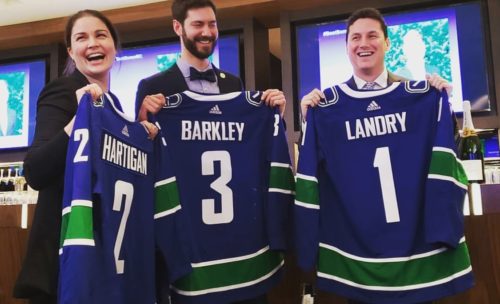 “It has been a long road leading up to this day and so rewarding to be acknowledged among my passionate peers and colleagues,” said Barkley. “I am thrilled to reconnect with my roots and be a part of this incredibly talented community. I feel very fortunate to share what I love with so many people and hopefully inspire others about the world of wine.”

The fifth annual competition attracted 12 wine professionals from across the province to vie for the title of Best Sommelier of British Columbia 2019. Held in the Captains Room, at Rogers Arena, in Vancouver, the event included a written theory exam and blind tasting and, for the top three scoring sommeliers, a series of practical tests.

In addition to placing in the top three at the B.C. competition, Barkley is one of five sommeliers who will represent Canada at the Master of Port competition, to be held in Montreal in April.
Barkley has been working as a sommelier for nine years. He joined Il Caminetto in October 2018, bringing with him a resume that includes a six-year stint in Europe working at some of France’s finest dining rooms and wine consultancies.

Barkley is active in a number of industry associations, including CAPS, The Court of Master Sommeliers and the Union de la Sommellerie Francaise.