HALIFAX — New Castle Hotels and Resorts celebrated the 20th anniversary of the opening of the Westin Nova Scotian with a toast by Halifax Mayor Mike Savage from the first keg of a commemorative brew, Westin 20, made by Halifax-area microbrewer Nine Locks Brewing, it was announced Aug. 15. 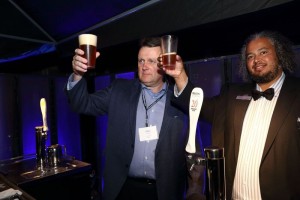 In April 1996, the vintage 1930 Nova Scotian was a few weeks away from the wrecking ball when New Castle founder David Buffam and his team acquired the historic hotel and began reviving it for a new life as the first Westin franchise. It previously had been host to visiting royalty and the first stop on the road to citizenship for many of the one million immigrants who arrived via Pier 21.

“Not only did they save a treasured landmark, but the reopening of the Nova Scotian was a catalyst for the redevelopment of the entire south end of Halifax,” said Halifax Mayor Mike Savage. “At the time, this part of town sorely needed investment and a new outlook, and New Castle played a big role in the improvements we’ve seen since.”

Since the re-opening on Aug. 6, 1996, the south end of Halifax has become a lifestyle hub featuring the only national museum in Atlantic Canada, the Canadian Museum of Immigration at Pier 21, the Cunard Center and dozens of shops and restaurants, as well as the new ViaRail Train station.

“When we opened, it was a challenge to convince groups that our part of town was safe,” said general manager John Wilson, who opened the hotel as assistant controller. “Now we regularly welcome the Prime Minister, and each November we host defense ministers from around the world when the Halifax International Security Forum meets. Now, we are at the center of everything that is fun and attractive to both visitors and locals in Halifax.”

Since its reopening 20 years ago, the Westin Nova Scotian has become the go-to hotel for major sports and entertainment events including the 2003 World Junior Hockey Championships, the 2004 World Women’s Hockey Championships and the 2006 Juno Awards.

According to Guido Kerpel, regional vice president for New Castle, the 20th anniversary celebration will continue throughout the year with an upcoming announcement of property enhancements, the unveiling of a lobby display highlighting the hotel’s history, and other surprises.