MCLEAN, Va. — Waldorf Astoria Hotels & Resorts announced on Aug. 9 its newest property, Waldorf Astoria San Francisco, which will be the centerpiece of a 2 million square-foot, mixed-used complex that will feature luxury entertainment, retail and office space. 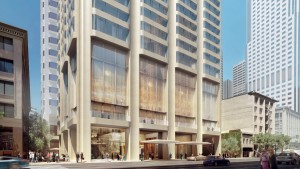 “With the revitalization taking place around the Transbay Transit Center, this neighborhood is poised to become a major hub for locals and global luxury travelers, which underscores Waldorf Astoria’s commitment of being in the centre of coveted gateway destinations,” said John T.A. Vanderslice, global head, Waldorf Astoria Hotels & Resorts.

Waldorf Astoria San Francisco will participate in Hilton HHonors, the guest loyalty program where guests who book directly through www.waldorfastoria.com have access to benefits including a personal concierge and complimentary WiFi at 26 Waldorf Astoria hotels worldwide.