HAMILTON, Ont. —  Vrancor Group has bought the 144-room Holiday Inn Hotel & Suites Oakville @ Bronte and the 105-room Staybridge Suites Oakville-Burlington, both about an hour west of Toronto, it was announced July 14. 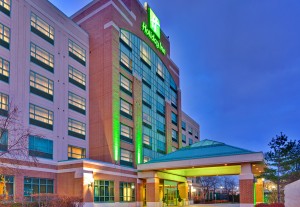 Nearby amenities include Glen Abbey Golf Course, home to Golf Canada and the Canadian Golf Museum and Hall of Fame.

The hotel also offers two meeting rooms with a maximum capacity of 30 people each. Meeting facilities are equipped with up-to-date audio and visual technology. Served onsite is a complimentary breakfast buffet and an evening reception with light refreshments Monday through Thursday. An outdoor patio with barbecue area is also available for guest use, along with ample parking. The hotel is a recipient of 2015 Certificates of Excellence from TripAdvisor and Hotels.com, along with IHG’s “Number One within the Region” award for the Highest Guest Satisfaction Score.