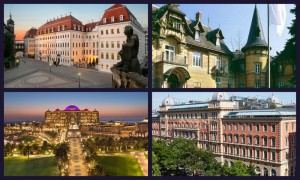 Planners can offer clients the royal treatment at the following properties:

♦ Palais Hansen Kempinski Vienna (Vienna, Austria) – Built for the World Exhibition in 1873, this property is situated by the Danube in the historic heart of Vienna. It features 152 rooms and suites, seven meeting rooms including a ballroom for up to 260 people, two fine restaurants, three bars, the Ottoman-style Kempinski The Spa, a fitness center, and traditional Viennese High Tea.

♦ Hotel Taschenbergpalais Kempinski Dresden (Dresden, Germany) – Built in 1705 by the Saxon king August “The Strong,” this hotel was restored to its full glory in 1995. Set on the Elbe River, this property has 214 guest rooms and suites; 20,903 square feet of meeting space (maximum capacity 500); and five dining venues.

♦ Ciragan Palace Kempinski Istanbul (Istanbul, Germany) – Once an Ottoman palace and home to the last Sultan, this property sits on the shores of the Bosphorus overlooking the ancient city. The only hotel in Istanbul that can be reached by yacht, helicopter and limousine, it features 313 guest rooms and suites (its Sultan Suite is one of the largest in Europe), 20 meeting rooms, six dining and entertainment venues, a spa, a fitness center and an infinity pool.

♦ San Clemente Palace Kempinski Venice (Venice, Italy) – Reopening in March 2016, this property is located on its own 17-acre island. It has 190 guestrooms and suites, many with views of the Lagoon and Venice. It also features six convention rooms for up to 400 people, elegant public areas, large courtyards, a spa, fitness center, historic monastery building, and a church that dates back to the 12th century. Other amenities include three restaurants, three bars, a heated swimming pool, driving range and tennis.