Maryse Morin is the first recipient of a SOAR Scholarship from Meeting Planner Professionals (MPI) Canada and Meetings + Incentive Travel. She received the honor from MPI Ottawa at the chapter’s 2015 Prix Prestige Awards Gala. 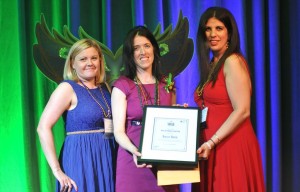 The SOAR Scholarship Program was created to recognize an individual MPI Canada chapter member who has demonstrated exceptional volunteerism to their MPI community. Each of the eight MPI Canada chapters will award the scholarship to a deserving member on an annual basis. Recipients receive a framed certificate and $500 (Cdn.) to be used for MPI programs and services.

Morin, who is the account executive for government, embassies and unions at Hilton Lac Leamy in Gatineau-Ottawa, was honoured for being a team player with an amazing work ethic and willingness to take on the tough tasks as well as being a “beacon of warmth, even on the coldest day.”

As an active member of MPI Ottawa since 2008, she has worked on several committees including the Publications Committee, the Awards Committee and most recently, the Membership Committee. She also organized the chapter’s involvement in trade shows like Tete-a-Tete.

In her current role on the Membership Committee, she is the first point of contact for individuals thinking of joining the chapter. She is also the person charged with contacting members who are contemplating leaving the chapter or not renewing their memberships. Her ability to sing the praises of being an involved and engaged member has contributed to the success and growth of MPI Ottawa.

“Maryse truly believes that being engaged and involved will yield better results, and she’s right!,” wrote her nominator. “With a young family at home and several work pressures, Maryse is busy, but not too busy to be the face of MPI Ottawa’s Membership Committee. We’re lucky to have her!”