HALIFAX — It was a night of celebration for winners of Meeting Planners International’s (MPI) Atlantic Chapter Awards Gala, held at the Delta Halifax last month. 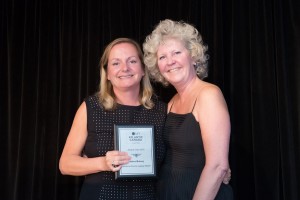 The annual gala feted winners Jeff Totten (WTCC, Halifax) in the category of Planner of the Year; Wu Conference Centre (University of New Brunswick, Fredericton) for Supplier of the Year, and Festival of Trees (Mental Health Foundation of Nova Scotia, Halifax) for Event of the Year.

The awards event tops off an exceptional year for the regional chapter, which now boasts its largest membership to date since the chapter’s creation 10 years ago. In 2006, a small group of event industry members established the chapter under the direction of Barbara Broome, currently conference services manager with The Prince George Hotel. In honor of her dedication, the Barbara Broome Legacy Award was created in 2013 to honour others who are committed to advancing the event industry in the Atlantic Region. This year’s recipient was Helene Moburg (Destination Halifax).

“Congratulations to all our recipients and the nominees on their well-deserved recognition,” said chapter president Roberta Dexter. “Events continue to be an integral part of our region’s businesses, associations and societies to reach positive business outcomes and these are the people helping to make this happen.”

Since the gala’s inception in 2013, the following members have received accolades: