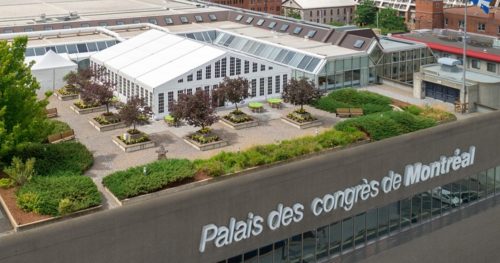 MONTREAL — Palais des congrès de Montréal (Montreal Convention Centre) is joining the United Nations’ 2030 Agenda for Sustainable Development and, as part of that commitment, plans to implement innovative programs aimed at reducing its environmental footprint and that of its users.

For example, the Palais has announced that its building will be going carbon neutral. The venue will achieve that goal by offsetting the greenhouse gas emissions stemming from the building’s energy expenditures by contributing to the forest management and tree planting efforts on four hectares of the Université Laval Montmorency Forest, the world’s largest teaching and research forest.

These new initiatives, to be deployed shortly, fall within the 17 Sustainable Development Goals set by the UN.

As another example, the facility will give event organizers the option of offsetting the greenhouse gas emissions resulting from their travel and planning activities in one of three ways:

• Offsetting through an investment in Gold Standard certified projects, including a reforestation project in urban and semi-urban areas across Quebec;

• Offsetting through tree planting in Quebec as part of a certified program based on university research on the role forests play in fighting climate change.

In order to spur the development of best practices, the Palais has set up a new Sustainability Innovation Committee comprised of of scientists and academics.

Culled from the province’s universities, these experts will facilitate the sharing of knowledge between the facility and the sustainability research being conducted in institutions of higher learning. They will also identify research partnership opportunities between the Palais and the academic community.

To support the development of information on forest management best practices promoting carbon capture via forest carbon sinks, the venue is teaming up with Québec universities, including Université Laval.

Additionally, the convention centre is partnering with the Coop FA aimed at supporting the Bourse du carbone Scol’ERE, a program educating Montreal elementary school children about the realities of climate change and encouraging them to adopt best sustainability practices.