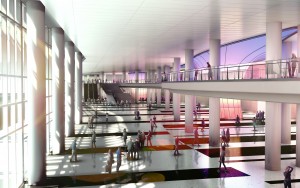 “We are breaking record upon record across industry indicators and are only beginning to realize the full potential and incremental economic impact once the new Miami Beach Convention Center opens its doors,” says GMCVB president and CEO William D. Talbert, III, CDME. “The GMCVB is hard at work selling the destination both through leisure and group marketing campaigns. We are booking business today for tomorrow’s convention center and fully leveraging our global sales offices, PR agencies, advertising and digital programs as well as targeting new business sectors in the pharmaceutical, tech, medical, insurance, finance industries among many more. Also, this year we are seeing a five per cent increase in hospitality jobs and already we are the number one industry for employment growth in the destination. The future is even brighter.”

Currently home to Art Basel Miami Beach, the Miami Beach Convention Center has been home to Democratic and Republic National Conventions, NAACP National Conferences, the NFL Super Bowl Media Headquarters and Muhammad Ali boxing matches. Now thanks to a $615 million investment, it is being reimagined as a state-of-the-art LEED certified facility with more than 500,000 square feet of exhibit space, a 60,000-square-foot mixed use ballroom, and 81 new breakout rooms spanning 190,000 square feet.

Meetings already on the books for the new center include the American Health Information Management Association (AHIMA), International Association of Chiefs of Police, and The Premier Association of Financial Professionals (MDRT). The new MBCC is expected to bring an additional $100 million per year to the destination’s economic impact.

In addition, the GMCVB has announced its support of the proposed headquarter hotel, which will provide the city with an 800-room, Art Deco inspired hotel. The future hotel, developed by Portman Holdings, will have a direct, lobby-to-lobby link to the renovated MBCC via Sky Bridge.

In the last 12 months, the city has experienced a three per cent increase in rooms sold across the destination for an all-time record of 13.2 million room nights, and RevPAR has increased seven per cent from $146.48 to $156.70. In the next 12 months, it will welcome an additional 2,300 hotel rooms. Global brands launching properties in the city include:

The city is also seeing growth in new direct-service airlift from countries around the world.

“Miami is officially a luxury destination attracting global premium brands in airline, retail, and hotel categories,” says GMCVB chairman Bruce Orosz. “With more than $5 billion in new development and investment projects coming to Miami and the Beaches in the next three years, it’s no surprise that the destination is a preferred location for the production industry as well as global entertainment and sporting events.”

All Aboard Florida – A $2.5 billion privately-run passenger train connecting Miami and Orlando.

Miami World Center in Downtown Miami – One of the largest private master-planned projects in the U.S. at $2 billion will include retail, restaurants, entertainment, residential and commercial offerings plus an 1,800 room Marriott Hotel with 600,000-square-foot expo center.

Skyrise Miami in Downtown – set to open in 2019, the 1,000 foot observation tower will include an amusement park-style ride that drops people down its side, a 550-foot bungee jump, a ballroom, moving movie theater and nightclub.