Starwood Hotels & Resorts Worldwide, Inc. has accepted a revised bid from its original suitor,  Marriott International, Inc., deeming it a superior proposal to the bid it received last week from the Consortium led by China’s Anbang Group Insurance.

The two companies announced this morning that they have signed an amendment to their definitive merger agreement that creates the world’s largest hotel company. Marriott and Starwood special stockholder meetings are scheduled for April 8, 2016 with a planned transaction closing planned for mid-2016. The revised agreement tops the Consortium offer by $1.69 per share of Starwood common stock.

This infographic, provided by Marriott, outlines the key points of the revised agreement. 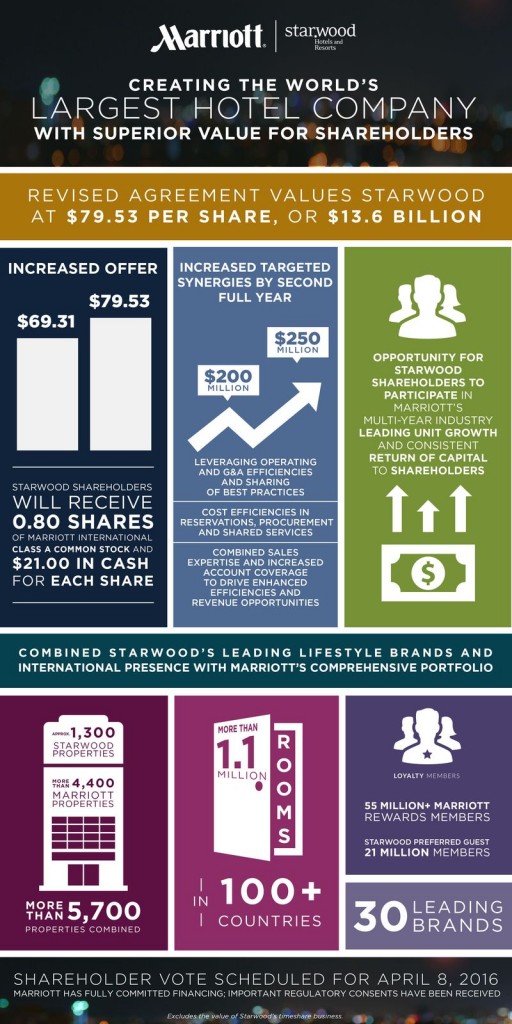 Under the terms of the amended merger agreement, Starwood shareholders will receive $21.00 USD in cash and 0.80 shares of Marriott International, Inc. Class A common stock for each share of Starwood Hotels & Resorts Worldwide, Inc. common stock. Excluding its timeshare business, the transaction values Starwood at approximately $13.6 billion ($79.53 per share), consisting of $10.0 billion of Marriott International stock, based on the closing price of $73.17 on March 18, 2016, and $3.6 billion of cash, based on approximately 170 million outstanding Starwood shares. Starwood shareholders will own approximately 34 per cent of the combined company’s common stock after completion of the merger, based on current shares outstanding.

In addition, Starwood stockholders are expected to receive separate consideration in the form of Interval Leisure Group (ILG) common stock from the spin-off of the Starwood timeshare business and subsequent merger with ILG, currently valued at $5.83 per Starwood share, based on ILG’s share price as of market close on March 18, 2016.

As a result of extensive due diligence and joint integration planning, Marriott is confident it can achieve $250 million in annual cost synergies within two years after closing, up from $200 million estimated in November 2015 when it announced the original merger agreement.

Other benefits of the revised agreement are:

Arne Sorenson, president and CEO of Marriott International, said: “After five months of extensive due diligence and joint integration planning with Starwood, including a careful analysis of the brand architecture and future development prospects, we are even more excited about the power of the combined companies and the upside growth opportunities. We are also more confident of achieving our updated target of $250 million of cost synergies. With a higher cash component in the purchase price, we have improved the transaction’s financial structure as well.”