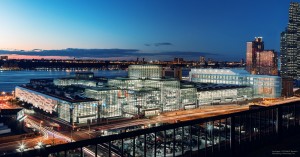 The project was announced on January 7, 2016 and is the seventh signature proposal of New York Governor Andrew M. Cuomo’s 2016 agenda. “The Javits Center has long been an economic generator for this state, but we want to build and expand it to ensure it remains a premier venue for the next generation,” said Governor Cuomo. “Through one of the most aggressive development plans in the history of the State of New York, we are transforming one of our largest convention centers into an unparalleled, world-class venue. The new Javits Center will continue to garner millions in economic activity, create jobs and keep New York’s economic momentum moving forward.”

The Javits Center is the busiest convention center in the United States. Located on Manhattan’s West Side on 11th Avenue between West 34th and West 40th Streets, the six block facility hosts trade shows, conventions and special events.

In 2014, the facility hosted 177 events and more than 2 million visitors. It supports 17,500 jobs locally and generates an estimated 478,000 room nights at the city’s hotels. In total, it had an economic impact of $1.8 billion last year.

Governor Cuomo’s proposal to expand the Javits is expected to create 4,000 full-time jobs; 2,000 part-time jobs; and 3,100 construction jobs. It is also expected to generate #393 million in new economic activity a year, a 22 percent increase to the $1.8 billion of activity generated in 2014; and increase the number of room nights booked by 42 percent (+200,000).

Changes and additions to the facility include:

♦ Increased Event Space: The expansion will see one million square feet of event space added to the facility. The new space will feature 500,000 square feet of contiguous space on one level, and a 60,000 square foot ballroom, which will be the largest ballroom in the US Northeast.

♦ Increased Truck Parking: Approximately 20,000 truck trips deliver and retrieve materials for events at the Javits each year. These vehicles are forced to park on nearby street and in a nearby marshaling yard during an event’s move-in and move-out. The plan includes a four-level, 480,000-square-foot truck garage constructed on the Javits Center’s property will remove these trucks from the area’s streets, reduce truck trips by 50 per cent, and improve air quality and traffic flow. The new marshaling facility will house hundreds of tractor-trailers at one time and feature 35 new loading docks.

♦ Increased Solar Power: The proposal includes the installation of a 34,000-square-foot solar energy array, the largest of its kind on a public building in New York State. As part of the expansion project, the Javits Center will seek LEED Platinum certification.

♦ Create a Terrace on the Hudson: The proposal includes the construction of a new green roof terrace with views of the Hudson River. It will be able to accommodate 2,500 guests.