A JW Marriott will be the first luxury hotel in Edmonton’s ICE District, the new mixed-use sports  and entertainment district currently under development. 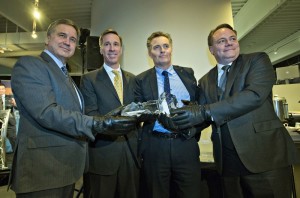 The JW Marriott Edmonton, which is expected to open in late 2018,  is one of the most significant hotel developments in Edmonton in more than three decades. It was chosen to replace the former Delta Hotel when Marriott International acquired Delta Hotels and Resorts in 2015.

“The new JW Marriott property will provide guests with enriching luxury in the heart of downtown Edmonton,” said Don Cleary, president, Marriott Hotels of Canada. “As the largest hotelier in Canada, the opening of JW Marriott Edmonton in ICE District speaks to our continued commitment to providing choices to Canadian customers and the confidence we have i the success of this incredible venture. The hotel will perfectly complement Edmonton’s evolving downtown and tourist landscape.”

The property will feature 356 rooms and suites, a Spa by JW and a restaurant operated by one of Canada’s premier restaurateurs. It will also have 25,000 square feet of state-of-the-art meeting and conference space and one of the city’s largest ballrooms (10,000+ square feet).

“We are thrilled to partner with Marriott and proud to bring the iconic JW Marriott Hotels & Resorts brand to ICE District, and open the first hotel of its name in Alberta,” said Daryl Katz, chairman, Katz Group. “This remarkable new property will continue to reinvigorate downtown Edmonton and demonstrates our commitment to best in class amenities in ICE District. The JW Marriott brand will bring a heightened hotel experience unlike any other in Edmonton, and provide residents and visitors with an exceptional experience for both business and leisure travel.”

The ICE District is a $2.5 billion 25-acre development in Edmonton’s downtown. In addition to the JW Marriott, it will include a public plaza, Rogers Place, two new office towers, condos and more.