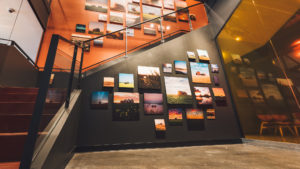 SASKATOON — Group Germain Hotels has opened an Alt hotel in downtown Saskatoon, the company’s first property in Saskatchewan and fourth in the Prairies.

Located at the intersection of Spadina Crescent and 2nd Avenue, Alt Hotel Saskatoon offers 156 guestrooms spread out over 14 floors.

Outfitted with floor-to-ceiling windows, guestrooms feature a workstation with an ergonomic chair and connectivity panel for electronic devices. Rooms also offer a Chromecast streaming device, and high-speed Wi-Fi is complimentary. Most rooms provide views of the city and South Saskatchewan River.

Other amenities include a 24-hour gym, and 4,500 square feet of meeting space divided into five multipurpose rooms featuring floor-to-ceiling windows. Grab-and-go food counter Altcetera, in the lobby, offers snacks and refreshments. Breakfast will also be offered on site “very soon,” according to a release.

Referencing the hotel’s geographical location is Altexpo, a series of 47 photos, taken by local artist Herry Himanshu and displayed in the lobby area, that pay tribute to the Prairies.

The Alt property is close to major attractions including the Remai Modern art museum, the Persephone Theatre and the Farmers Market.