Group Germain Hotels is adding a new Alt Hotel to the River Landing area of Saskatoon, Saskatchewan. The property will be a key feature of the city’s extensive River Landing development project, a new extension currently under construction in the south downtown business district. 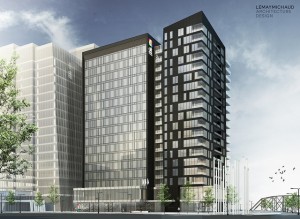 The ALT Hotel Saskatoon is scheduled to open in 2018.

“We are pleased to be working closely with Greystone Managed Investments Inc., Victory Majors, Triovest and the City of Saskatoon on the opening of our newest Alt Hotel,” said Jean-Yves Germain, co-president of Group Germain Hotels. “This new location, in the vibrant River Landing area of the city, represents our third Alt Hotel property in the western provinces. It’s an ideal location and an exciting marker of the steady progress towards our goal of offering 20 properties to visitors across the country by 2020.”

The 15-floor Alt Hotel will be located northeast of the intersection of Spadina Crescent East and 2nd Avenue, in front of the Remai Modern Art Gallery and within walking distance of many of the city’s other main attractions. All 155 guest rooms will offer views of the South Saskatchewan River.

The property will also have 4,000 square feet of meeting space outfitted with the latest technology, a fitness centre and space for a restaurant.

Christiane Germain, co-president of Group Germain Hotels, comments, “We are thrilled to introduce the city of Saskatoon to the hospitality of the Alt Hotel. At the same time, we look forward to building another renowned Alt Hotel team from the local talent pool in Saskatoon.”

Saskatoon: Vibrant city, sophisticated culture
Saskatoon is one of Canada’ fastest growing communities. It has a population of more than a quarter million and attracts a diverse range of industry, businesses and talents.  Saskatoon is home to the University of Saskatchewan, which also serves as a hub for leading-edge technology. Major attractions like the Remai Modern Art Gallery, as well as a long list of annual music and arts festivals, continuously delight culture-minded residents and visitors.

“River Landing was once a vision and is now a reality,” says Mayor Donald Atchison. “More than 360,000 people visit River Landing every year and Group Germain Hotels’ proposed investment further underscores Saskatoon’s position as a major draw for business and leisure travelers.”

Known as “Parcel Y,” the new development at River Landing is owned through a joint venture partnership between Greystone and Victory Majors. Triovest, one of Canada’s leading real estate advisors, has been appointed the development and leasing manager for the project.