Robert Mercure, general manager of Fairmont Le Château Frontenac, has won the Pinnacle Award for the 2015 Hotelier of the Year in Canada. 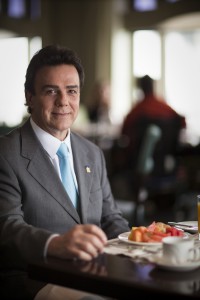 “I am deeply touched and personally appreciative of this amazing honour from peers within the hospitality industry,” says Mercure. “It is one of the most moving and amazing moments in my hospitality career.”

Given by Foodservice & Hospitality and Hotelier magazines, the Pinnacle Awards are the only national awards for the $72 billion Canadian hospitality and food service industry. Winners are judged on impact on the industry, significant innovations and accomplishments, and community spirit.

Having worked for more than 30 years in the hospitality industry, Mercure has several major accomplishments on the record. Most recently, he oversaw the major renovation of the Fairmont Le Château Frontenac, which reinvented and reinvigorated the iconic property. At the same time, he guided the implementation of cutting-edge restaurant concepts, increased and redecorated meeting room capacities and created a museum display, all while guiding the hotel to record levels of customer satisfaction. He was also at the helm of the hotel in 2014, when it won the Tourism Industry of Canada (TIAC) Award for “Best Tourism Business” in Canada.

In addition, Mercure sits on the Board of Directors of the Quebec City Convention & Visitors Bureau and is actively involved with Destination Canada. He is also working with the Augustine Sisters in developing a non-profit heritage wellness center known as the Monastery Hotel.