NEW YORK — Fairmont Hotels & Resorts has installed bee hotels at 10 of its U.S. properties to serve as a habitat for wild mason bees’ nesting and reproduction, it was announced last month. 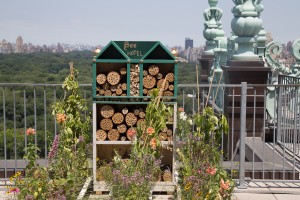 Bee hotel at The Plaza, in New York.

Fairmont developed these hotels in conjunction with Pollinator Partnership to combat habitat loss, a leading cause for the decline in wild bee populations, which pollinate one-third of the food produced in the U.S.

For more than a decade, through its Bee Sustainable initiative, Fairmont has sought to improve the overall health and conservation of bee species globally, and has built 40 apiaries and pollinator bee hotels at properties around the world.

The Fairmont bee hotels were built by engineers at participating locations across the U.S. in consultation with Pollinator Partnership, the largest not-for-profit organization dedicated exclusively to the protection and promotion of pollinators and their ecosystems. Designs incorporate reused materials and were inspired by local surroundings.

Starting in mid-July, a limited number of mini-bee hotels will be available for purchase at fairmontstore.com. Guests can also build their own DIY bee hotel by following a step-by-step guide provided by Fairmont.

To raise further awareness about the importance of bees in American food systems, executive chefs at participating Fairmont hotels have developed special menu items with ingredients that rely on bees for pollination.

A series of Bee Sustainable packages will also be available throughout the summer, with participating hotels offering 10 per cent off the daily rate and a $50 dining credit per stay. Ten dollars from each stay will also be donated to Pollinator Partnership to support important bee research and programming.

Research and development is underway with River of Flowers to build regionally relevant bee hotels in Dubai and Singapore, with more global locations planned in the years ahead.