More than 40 event professionals turned out this morning for the Toronto meetings industry’s first education session on human trafficking and to learn the first steps the planning community can take to help combat the crime.

“Human Trafficking in Our Backyard: A Conversation” was held at St. James Cathedral Centre in downtown Toronto. The session was spearheaded by Sandy Biback, CMP Emeritus, CMM, Imagination+ Meeting Planners Inc. Its organizing team was comprised of:

It was sponsored by St. James Cathedral Centre, AV-Canada and Base Consulting, all of which donated their services (venue, AV and registration).

Biback began researching the issue of human trafficking and what can be done to combat it at the planner and venue levels more than a year ago. She said that she found plans to work with hotels, train people, talk to educators and school-age students and more. However, with the exception of one small group in Washington, nothing addressed the problem from a planner perspective.

Attendees learned about human trafficking in their backyard from:

Laurie Scott, MPP for Haliburton-Kawartha Lakes-Brock and Critic for Women’s Issues at Queen’s Park, was unable to attend but delivered her comments via a video. She emphasized the need for awareness of human trafficking, explaining that 95 percent of victims are women, the average age is 14 and 90 percent are Canadian-born. She also spoke about the Saving the Girl Next Door act that she has tabled in the provincial legislature.

Over the course of two hours, the other speakers detailed the nature of the crime. Richardson, who was herself a victim of trafficking, explained that trafficking means to coerce, harbour, transport and conceal someone. It may include moving the victim from place to place. She also talked about how hotels, the internet and gangs are involved in the crime, which increases during conferences, conventions and special events.

Porter, the GM at Toronto Don Valley Hotel & Suites, outlined training he and his staff had undergone to help identify possible victims and perpetrators, and assist police. Members of the hotel’s housekeeping team were particularly instrumental in spotting trafficking, he said.

FIRST STEPS: WHAT YOU CAN DO NOW 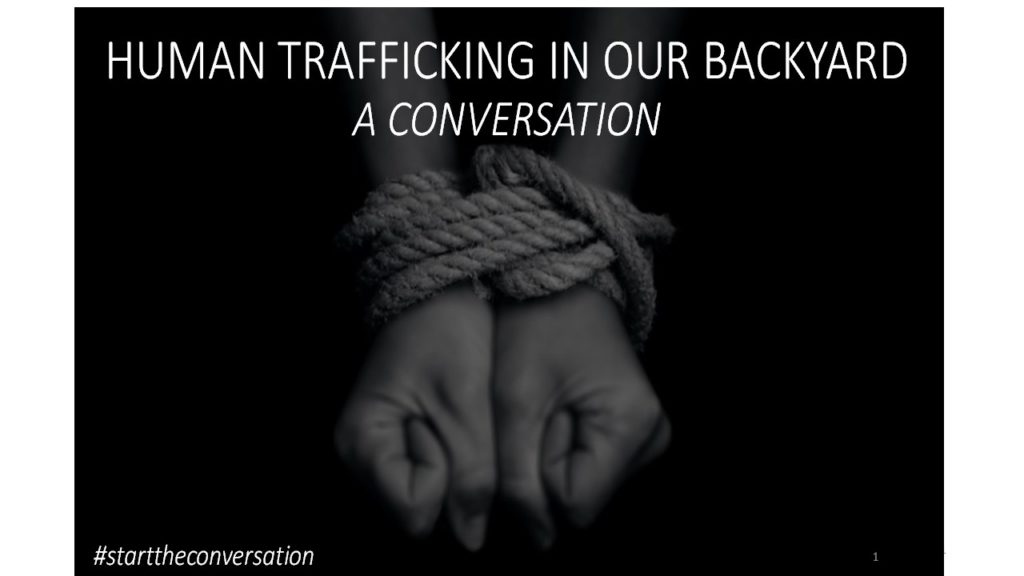 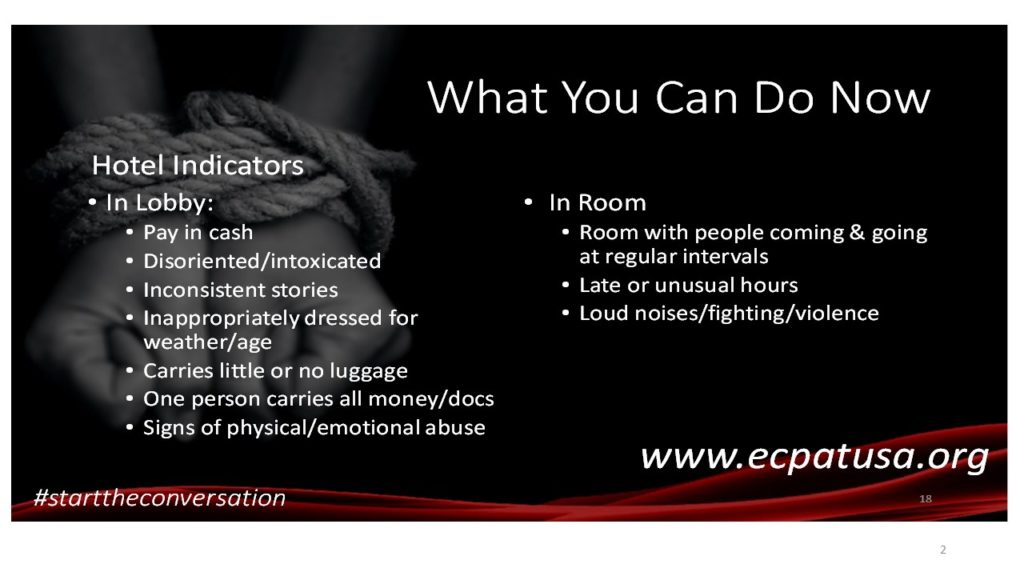 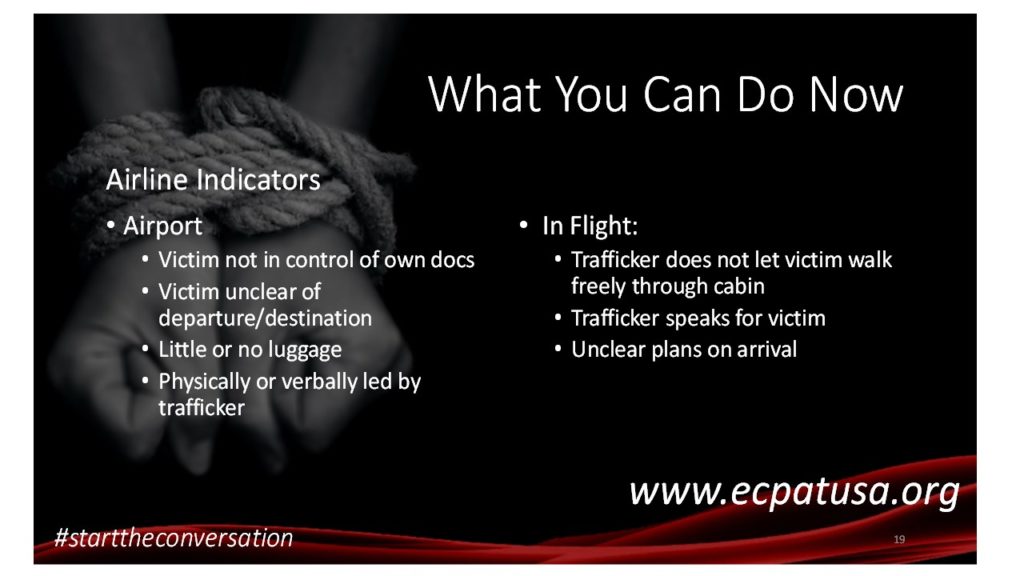 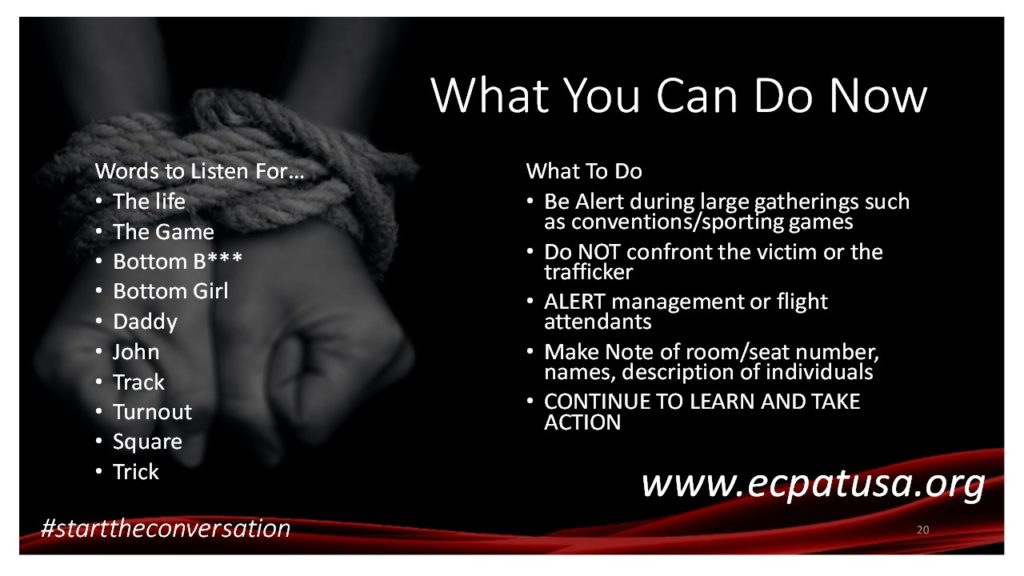 Sandy Biback and her team have supplied the following list of resources and information for anyone who would like to learn more about the crime of human trafficking and what they can do about it.

HUMAN TRAFFICKING IN OUR BACKYARD: A CONVERSATION

Below are some of the resources found most useful in researching for the breakfast.  Each one will lead you in many more directions.  Have any you want to share?  Let us know biback@imaginationmeetings.com

Below are questions Planners can ask when submitting RFP’s for space.  Taken from a variety of resources including www.ecpatusa.org  and Convene Magazine (www.pcmaconvene.org )

The travel industry plays a prominent role as an enabler to criminals who transport and sell child & adult trafficking victims.

Persons accused of human trafficking tend to be men