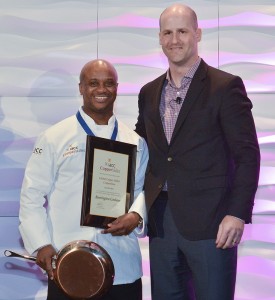 The competition finals were held Tuesday, April 19 at Convene Midtown East in New York City as part of the association’s Connect conference.

There the six winners of IACC’s regional contests in the Americas (Canada/US), Europe and Australia/Asia/Pacific competed against each other and the clock in a Chopped/Top Chef-style cook-off, which required them to produce two servings of a dish made from a selection of fresh vegetables, fruits and greens; basic pantry options; and a “mystery basket” of three protein options. 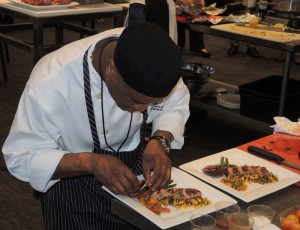 Graham kept cool under pressure and plated a dish of black pepper-crusted pork tenderloin with five spice, maple duck breast, corn and baby potato hash, heirloom tomato and green olive relish, and asparagus tips. He even had a few minutes to spare in the 30-minute event.

However, he didn’t learn he had won over the judges until the next evening when he was presented with the Copper Skillet top prize at the IACC-Americas Awards Banquet on April 20th. Jesse Hughes, general manager and executive chef at Vue Grand Hotel in Victoria Australia, took home the Copper Skillet in the Junior Category (under 26). Hughes served soy-glazed duck breast with soba noodles, pickled salad and pork dumplings. 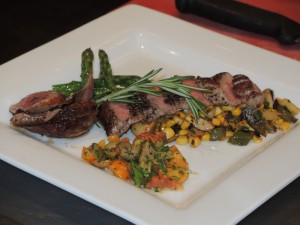 Graham’s journey to the top prize began in January when seven chefs from IACC properties across Canada competed in the Canadian Copper Skillet Competition at the BMO Financial Group Institute for Learning in Toronto.

Graham won the top prize in the Senior Category, serving up a dish of pan-seared trout, jerk pork tenderloin on a bed of warm quinoa salad and pineapple-pomegranate salsa. He was joined on the podium his St. Andrew’s Club colleague Chef Alexsandra Lalonde, who won the Canadian competition’s Junior (under 26) Category.

Graham then moved on to the Americas chapter competition, which was held in February at Tempe Mission Palms Hotel (Arizona). Once again he took top honours in the Senior Category, presenting the judges with pan-seared salmon with mango relish and beef tenderloin with lemon and green onion au jus with creamy polenta and sauteed zucchini ribbon and honey mushroom.

Andrew Hodd, managing director of St. Andrew’s Club, and Graham’s wife were at the finals cheering the chef on. “We couldn’t be more thrilled for Barry,” said Hodd.