Group Germain Hotels is investing $35 million in a second ALT property in the Atlantic provinces. 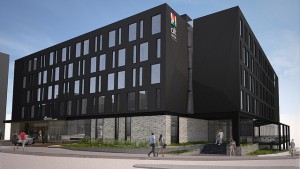 The family-owned Canadian company opened its first ALT Hotel in Halifax, Nova Scotia in 2013. The new property, which is being built in St. John’s, Newfoundland, will open in 2017. Construction will begin shortly.

“The announcement of the St. John’s opening brings our company one step closer to our goal of offering 20 properties to visitors across the country by 2020,” states Jean-Yves Germain, co-president of Group Germain Hotels.

Situated in a prime area of downtown on the northeast corner of Water Street and Prescott Street, the four-storey, 148-room hotel will overlook the harbour and offer a view through The Narrows.

It is also in close proximity to meeting and convention centres as well as the city’s main tourist attractions.

Christiane Germain, co-president of Group Germain Hotels, comments, “Like all Alt Hotels, our St. John’s location will feature the modern yet unpretentious design and high quality comfort our guests appreciate, all at an accessible price. In this particular location we’re also adding some custom features that will pay homage to the site’s important cultural history.”

Honouring the history of the Marshall Brothers cellar

The outline of the cellar footprint will be incorporated into and prominently featured in the hotel’s exterior landscaping and paving. A wall in the hotel lobby will display a montage of materials excavated from the cellar as well as historical photographs and descriptive text.

Designed by architects LEMAY MICHAUD, the hotel will feature 4000 square feet of meeting space equipped with cutting-edge technology, a 2500 square-foot area for a restaurant and patio, a fitness centre, and ample parking for hotel guests as well as the general public.