Independent planner Louisa Davis remembers the day National Meetings Industry Day was born. It was at a gathering of the Canadian Council of Meeting Professionals International (MPI) at Rimrock Resort Hotel in Banff, she says. The year was probably 1997, maybe 1996. She was president of the Montreal chapter of MPI. The Council was comprised of the chapter presidents and a few others. Rita Plaskett, CMP, CMM, Diane Stefaniak and Marsha Jones, CMP, CMM from Toronto were there. As was Fiona Marshall White from Vancouver.

“We split into groups to talk about particular issues and initiatives that had come up,” Davis recalls. “I had a flip chart and we were in a little team of three or four people. I do mind mapping and had mind mapped what people were saying. We initially called it the government advocacy program. I had drawn a Canadian maple leaf with the word GAP in the middle on the flipboard. We laughed and decided the acronym GAP would not be a good thing. Eventually, as we discussed it, it turned into National Meetings Industry Day.” 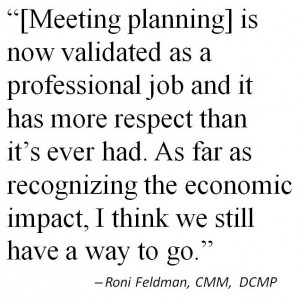 According to Davis, there was also talk about doing an economic impact study. Planners felt government and key policy decision-makers didn’t understand the impact of the meetings and convention sector on the economy. We were a driven little team, she says. And so, at the tip of a red felt marker NMID came into being.

However, Davis’s account is not the only story about the beginning of NMID. In response to an article about NMID in the Winter 2004 MPI Communique, Irene Davidson Fisher penned a letter on behalf of the Greater Edmonton MPI chapter explaining that it had created National Meetings Industry Day and that the Canadian Council had simply implemented a mandate for chapters across the country to celebrate it “on or about the same month.” Davidson Fisher said that the initiative started in Edmonton with the local chapter receiving municipal recognition for meeting professionals. “Each year we had a special event where the City of Edmonton presented a certificate of proclamation,” she wrote. “This grew to having provincial representation.”

Chapter representatives sitting on the Canadian Council were interested in the concept, which was tabled and then taken back to the other chapters. “It was about three years later, when I became Edmonton’s Canadian Council representative, [that] we developed an advocacy plan. That plan was to encourage the members across Canada to become more interested and involved with the various levels of government and engage their support for the industry,” she explained. “This led to Canadian Council adopting the idea of Edmonton’s Meeting Professionals Day to raise awareness of the value that meetings play in the Canadian economy at the local, provincial and national levels of government. This then became National Meetings industry Day.”

Only at first glance are these two accounts at odds with each other. Clearly something or some things inspired the Canadian Council to implement National Meetings Industry Day. It could well have been the Edmonton chapter’s initiative. In addition, MPI members in the United States had staged their own version of a “Walk on Washington” around 1995. Its goal was to make government aware of the economic impact of the industry. Was it a spark as well? Unfortunately, time has dimmed memories and determining the exact sequence of events is difficult. However, after talking to many people, I know the following to be true: by the mid-1990s, planners were tired of having their profession misunderstood and denigrated. They were frustrated with the lack of respect the industry received. And more than a few of them were mad as hell and determined to change things. 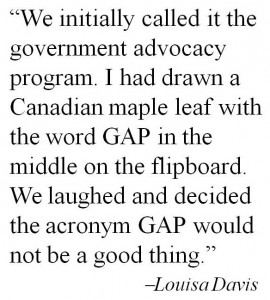 Roni Feldman, CMM, DCMP, tells me that at the time a number of senior planners were “really, really frustrated with the fact that the government and the public had no respect or knowledge or inclination to learn about the value of the industry to the economy.” A portion of that frustration came from being lumped in with hospitality and tourism by government at all levels. “We always got the leftover minister and by the time that minister learned what the industry was about they moved him somewhere else. We were totally disrespected,” she says.

An additional issue, Feldman explains, is that meeting planning was not being recognized as a professional industry. “There were people [planners] doing things in companies that their bosses didn’t understand. We had to validate that it was a real industry as opposed to just an add-on, call up a hotel sort of thing. In my mind, those were the clear objectives: to get the industry recognized for its economic impact and planning meeting and events recognized as a valid profession. We needed to bring everybody in the industry together and get the media and politicians out and say, ‘Hello! Here we are.’”

Davis also emphasizes the importance placed on bringing the industry together. She says that at the time Canada was the “I” in MPI. “We were the US’s second cousin. There was a feeling that issues like tax legislation, which only impacted Canadian planners, wouldn’t be addressed by MPI headquarters. We wanted to be working on behalf of Canadian interests.” To do so effectively, all the associations had to unite.

Though she didn’t become involved with NMID until 2000, Katherine Wright, CMP, CMM, agrees. “We needed to present a united front and have some sort of national representation of the industry. To make our voices heard we couldn’t just be the 300 members of MPI Toronto or the 40 members of CanSPEP or 30 members of SITE—whatever the membership numbers were at that time. We had to unite these siloed groups.” National Meetings Industry Day was an opportunity for the industry to address issues, politicians and media together.

I ask Davis how it feels to see NMID go global. She replies that it’s cool that something written in red felt marker on a flipboard 20 years ago could turn into something like this. But she points out that to survive and thrive NMID has needed the blood, sweat and tears of huge numbers of engaged, active volunteers; lots of fundraising; and the support and involvement of MPI Foundation.

Feldman concurs. “There was Rita Plaskett, Ron Cameron, Leslie Wright, Sandy Biback—people who’d been in the industry for awhile. I’m incredibly proud of everybody that was involved and continues to be involved.”

Davis also notes that from the beginning it’s been a mix of young and seasoned industry members—energy and experience—that has propelled NMID forward.

Has NMID achieved the objectives set out 20 years ago? I ask Feldman. She thinks for a minute and then explains that it’s met one of its objectives. “[Meeting planning] is now validated as a professional job and it has more respect than it’s ever had. As far as recognizing the economic impact, I think we still have a way to go.”

—Lori Smith is the editor of Meetings + Incentive Travel magazine and meetingscanada.com.